I love collecting Cleveland Indians baseball cards. Those adventures appear at www.tribecards.net. This page will highlight certain posts from that site among other aspects of my collecting habit.

Cards are in the Mail! 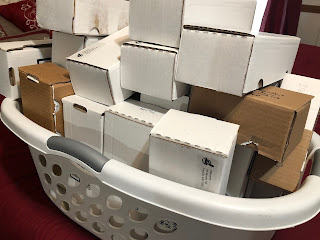 If you signed up for my Pack A Daily do-over mailouts, the first round has been mailed!! Note that I had (and still have) mailers that were already put together as well, so those have gone out or will be going out before Christmas.

I had hoped to bring PAD Circus back in 2020, but my daughter is a senior this year so not sure how much time I can put into it. We’ll see!!

So, if you picked a team, I hope you enjoy your cards!!

Author: --David
Yet Another PAD Circus Update! (07/04/2019)
Whew! You would not believe how many cards I've been sorting through... Or, maybe you would if you've been around for the several PAD Circus projects we've had over the years.

Because of the holiday, I was actually able to knuckle down and just get the sorting done.  Or, mostly done. I still have oversized and oddball-sized items to sort (A&G box loaders, Bowman big, Topps Big, Donruss large cards, an 8x10 or two, Topps coins/chipz, MSA discs, etc etc).

I did a VERY rough estimate of the cards which are sorted into team boxes (pictured below). At roughly 600+ cards per team (except Indians as noted below), the total for that is nearly 20,000 cards! Note, team names are upside down because they are written on the lids for the "drawers." Oh, and Mariners are lower right, unlabeled because the Mariners box is adrift somewhere...


Add to that the non-baseball items (note: also includes players for which I could not find a team due to only being minor league, japan-only, etc). How many cards are there of those? I have no idea right now, but we could conservatively guess more than 2000 easy. Those are contained in the two photos below:


Then, we have the myriad of Indians cards that I have scattered about. The Indians team box (above) had cards in it, but the majority of Indians cards (shown below) have not been sorted - meaning I have to take inventory and see which ones I need and which ones will be sent off. Frankly, after seeing all these, I am tempted to simply ship them ALL off...

Altogether, we're easily talking about 30,000+ cards sorted or to be sorted! Holy smokes!!

Since we're on the subject of sorting, here are a few observations I've made:

Author: --David
PAD Circus Update Update
Hey everyone! It’s been a looong time since I’ ve Shared what’s going on with the PAD Circus repack send-outs. In short, I have been sorting off and on for the past few months. I haven’t forgotten about ya! I hope to have everything sorted by Thanksgiving 2019.

Thanks to everyone who has supported the efforts here at Tribecards! Feel free to look for the old post about available teams.

I can you that anyone grabbing a team is going to get LOTS of cards!!

Starting in 2020, I plan to bring PAD back to life! This time, I promise what you win you WILL receive - right after the 2020 season ends!